Serene has some prerequisites that you should install for it to work properly. Here we document how you should check if you have correct versions of tools required, and install them for a healthier Serene environment.

If you have Visual Studio 2015, please make sure that you have Update 3 installed by looking at Help => About 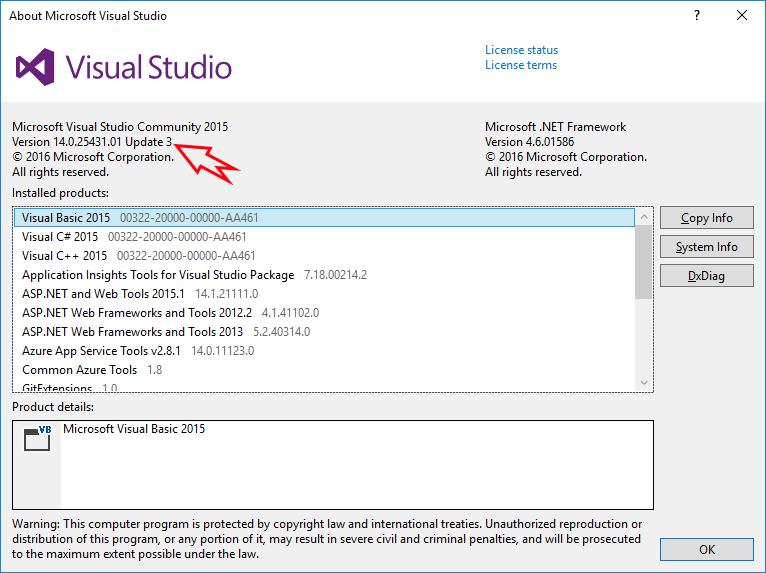 It might be possible to work with Visual Studio 2013 as well but you'll have many intellisense errors as TypeScript 2.1.5 can't be installed in VS2013.

Currently, the recommended version of TypeScript is 2.1.5.

Even though Serene uses NodeJS based TypeScript compiler (tsc) on build, Visual Studio still uses its own version of TypeScript for intellisense and refactoring etc. If you have an older version of that extension, you'll be greeted with many errors as soon as you open a Serene project.

To check what version of TypeScript Visual Studio Extension you have, again see Help => About: 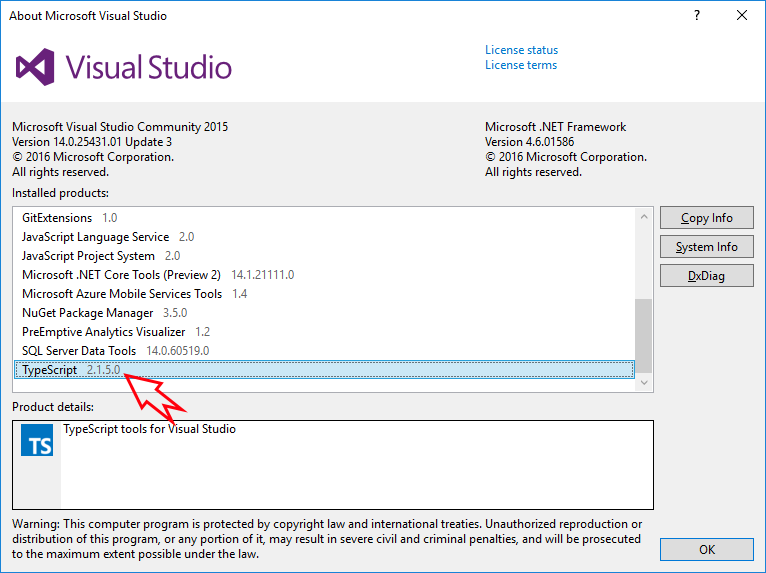 If you have something lower than 2.1.5 there, you need to install TypeScript for Visual Studio 2015 extension.

TypeScript version you see in Control Panel / Add Remove Programs doesn't matter at all. What matters is the one that is enabled in Visual Studio.

TypeScript versions after 1.8.6 requires Visual Studio 2015 Update 3 to be installed first, so even if you try to install the extension it will raise an error, so please first install Update 3.

You can get TypeScript extension for your Visual Studio version from http://www.typescriptlang.org/#download-links.

Here is the link for Visual Studio 2015:

But don't click the download button right away. Expand Details section, and select the exact version you need (e.g. 2.1.5): 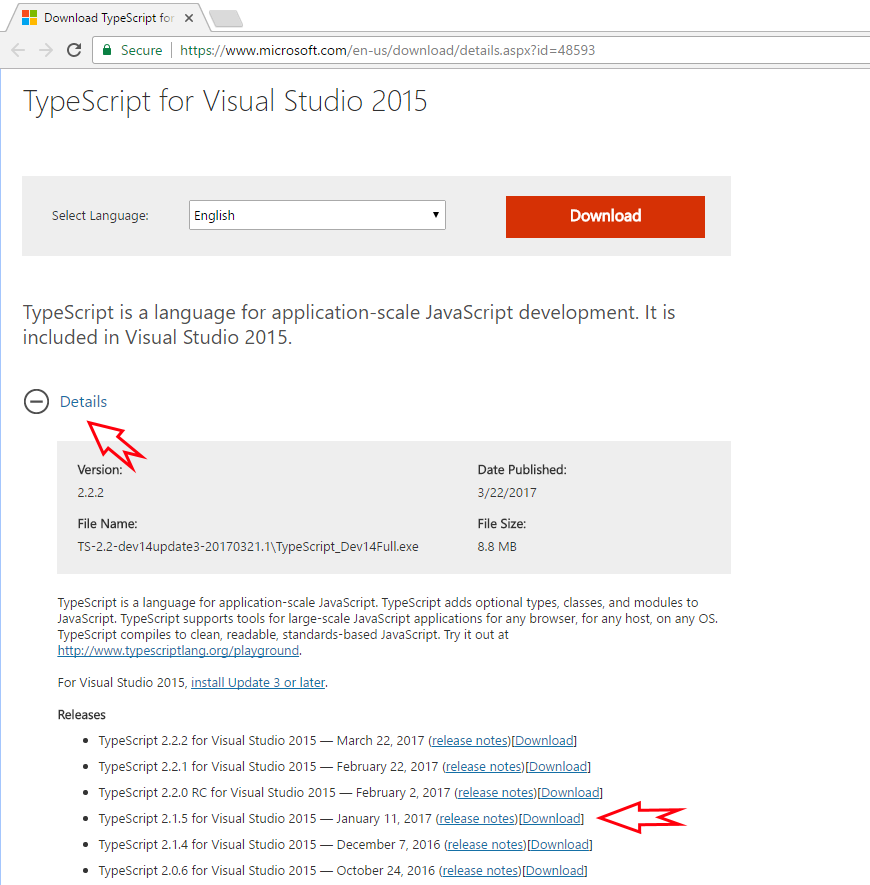 Later versions, e.g. 2.2.2 might also work but keeping in sync with the version we currently use, can help you avoid compability problems that might come with them.

Serene uses NodeJS / NPM for these:

Serene will check their versions on project creation and ask for confirmation to download and install them. Anyway, please check your versions manually by opening a command prompt:

If you get an error, they might not be installed or not in path. Please install LTS (long term support) versions from https://nodejs.org/en/

Current version might also work but is not tested.

Even if you have correct Node / NPM installed, Visual Studio might still be trying to use its own integrated, and older version of NodeJS. 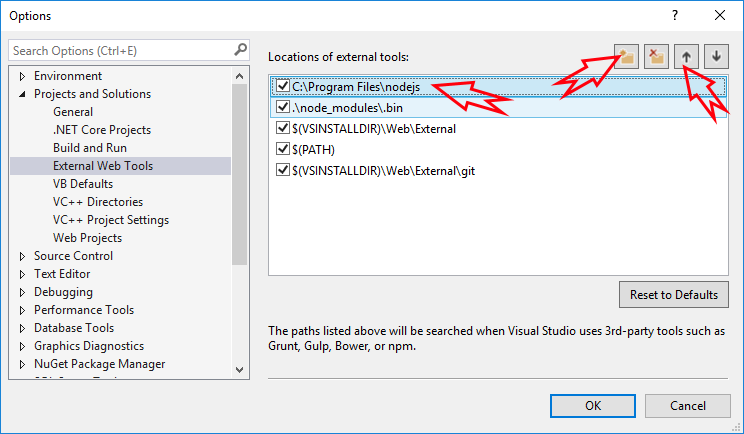 After you have installed prerequisites, please follow Getting Started section in Serenity Guide:

This option is available in OSX / Linux / Windows with some help from our new NPM package Serin.

Thanks to Victor (@vctor) for Linux screenshots

Create an empty MySerene (or a name you like) folder.

Serin has to be run from a completely empty directory

While inside an empty directory, run serin:

After Serin creates your project, you will have a MySerene.Web folder under current directory. Enter that directory:

If you are using Visual Studio, you can just rebuild and run your application (after setting connection strings).

Make sure you run this command under MySerene.AspNetCore folder.

Now open a browser and navigate to http://localhost:5000.

Actual port may vary. You'll see it on console after executing dotnet run.

Please don't try to use Sergen with graphical UI (the one you see in guide) on a .NET Core project.

.NET Core version has its own version of sergen (command line based).

To use sergen, open a command prompt and CD into the project directory (one that contains appsettings.json) and type:

You can use TAB completion, e.g. type D and press TAB to complete Default.

After pressing Enter you'll get a list of tables in that database: 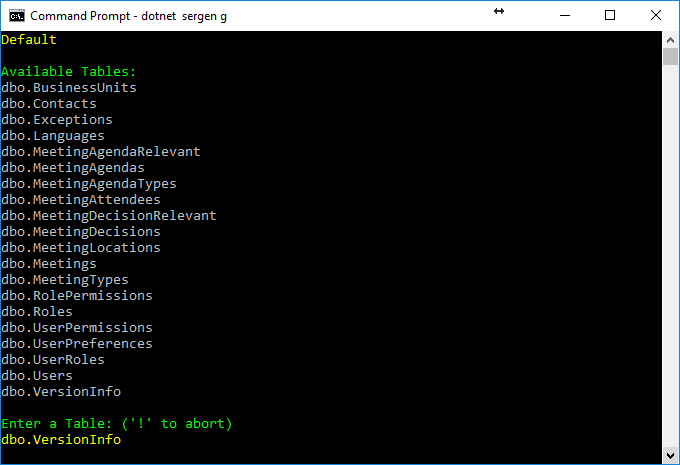 Again, they exact table name or use TAB completion. 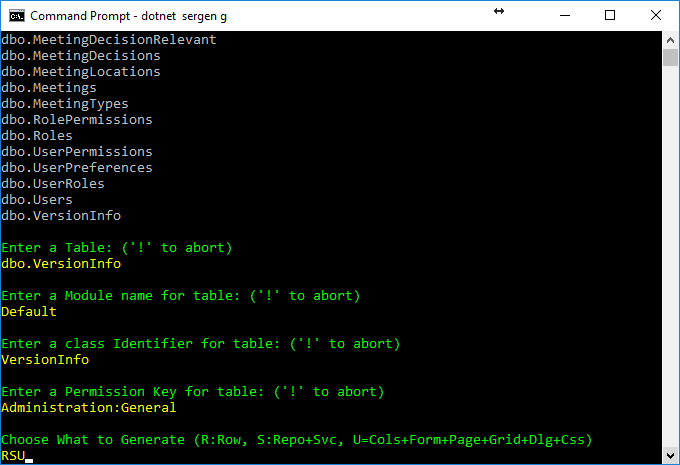 Then, you can select a Module Name, Class Identifier, Permission Key and what to generate, or just accept defaults by pressing ENTER.

Your project is configured to automatically transform MVC, ClientTypes before build, and ServerTypings after build.

Here is how it is configured in your CSPROJ file:

You might also run these commands manually in project directory:

To transform MVC, e.g. view location helpers, make sure you are under project directory (the one that has appsettings.json file) and run:

To transform ClientTypes, e.g. editor, formatter and other types:

Make sure your project runs before executing transform, as sergen uses your output DLL.

It is also possible to run them ALL at ONCE:

.NET Core projects doesn't support installing content files, e.g. scripts, css, fonts, images delivered via NuGet packages into ASP.NET Core projects, so we wrote a workaround for you to use until we migrate all to NPM.

This will enumerate referenced packages and restore static content from them into wwwroot folder.

You can update Serenity.Web and Serenity.CodeGenerator packages as usual from package manager console. But after updating, please run

so that static script files in Serenity.Web can be copied and updated in your wwwroot directory.